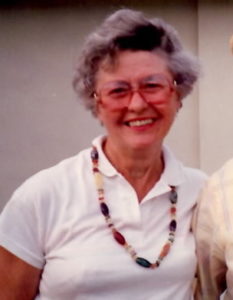 Marjorie Saunders Magruder was born in 1920 in Wray Colorado. Growing up in the shadow of the Great Depression she was fiercely independent and self-reliant. She attended Cottey College in Missouri, but her college career was cut short by her father’s death.

When World War II broke out in Europe, she answered the call by joining the American Red Cross in support of the U.S. servicemen. She drove a Red Cross Clubmobile in England, boosting morale serving coffee and donuts to the growing number of U.S. servicemen there. After D-Day she and her Red Cross convoy followed the advancing Allied Armies into France. Her Red Cross convoy was strafed by a German plane near Saint Mere Eglise in France.

Once back in England she married Joseph Hull Magruder, a staff officer with the U.S. 8th Air Force, after a whirlwind courtship. Their marriage in November 1944, at High Wycombe Abbey outside London, lasted 45 years until Joe’s death in 1989. Marjorie and Joe settled in Connecticut where they raised three children.

She was an avid reader and instilled a love of reading in her children and grandchildren. She was the Program Director of the Public Library in Fairfield, Connecticut, where she lived for many years. Later in life she moved to Newport, Rhode Island, where she was heavily invested in the community and volunteered with numerous organizations.

Marjorie would have been delighted to know her legacy was carried on through these Scholar Grants and that women are able to achieve higher education despite multiple obstacles. May her spirit continue to inspire generations of future scholars who can benefit from her self reliance, independence, and strength.