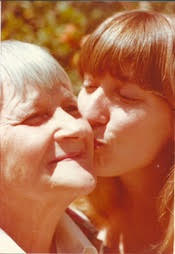 given by Sylvia Hillyard Pannell

Forest and her daughter, Sylvia

Forest Stewart Hillyard was born in 1907. Her daughter, Sylvia Hillyard Pannell, describes her mother, who came of age in the 1920s, as a “real flapper.” Forest was a courageous and self-determined woman who enjoyed the independence of having a successful career and actively encouraged her students to strive for independence even as she had. As a native of West Virginia, Forest earned her B.S, degree in Home Economics Education from Marshall College (now Marshall University) in Huntington, West Virginia and the Vocational Home Economics certificate at West Virginia University. During her career, she worked as a high school Home Economics educator in West Virginia and in Florida. After retiring, she continued her teachings through continuing education programs.

Forest was a stalwart advocate of equality for women and a committed supporter of the cause. Throughout her life, both in and out of the classroom, she worked tirelessly toward the advancement of women through promotion on the importance of education and actively encouraging women to pursue their career goals. When she passed away in 1993, Sylvia asked friends, family, and colleagues to give to the Jeannette Rankin Foundation in her mother’s name. In 2012, Sylvia made a donation to the Forest Stewart Hillyard Fund to provide a permanent Scholar Grant to help low-income women across the country achieve their educational and career dreams. Sylvia is grateful that this memorial to her mother continues to underscore those closely held goals that her mother held dear and imparted to so many women including her many students, mentees, and family members.